In descriptive fashion, Pope Francis recently told journalists that under provocation violence is acceptable, and should be expected.

“You cannot make fun of the faith of others. There is a limit” 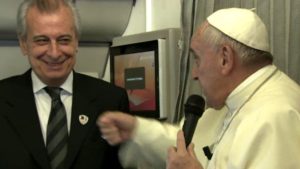 On a flight headed to his recent visit to the Philippines, Pope Francis asserted that there is a need to defend religious freedom, however, even this has its limits. According to Francis, the line for freedom of speech must be drawn in the sand when it comes to mocking the religious faith of others. I suppose if you are a person of faith, you may nod your head in agreement, however there are some serious complications that can attend the acceptance of this type of rhetoric. And , when I say serious, I mean fatal.

“You cannot make fun of the faith of others. There is a limit”

During his aerial press conference, Pope Francis stated that “I believe you cannot reacted violently. But if my good friend Dr. Gasparri says a curse word against my mother, he can expect a punch.” As, the former boxer, Pope Francis made this statement, he turn towards Dr. Gasperi, and in a noticeably emphatic fashion threw a shadow punch a him. Dr. Gasparri and the press laughed. “Its normal, its normal” said Francis. “You cannot provoke. You cannot insult the faith of others. You cannot make fun of the faith of others.”

What an absurd practice to advocate, by a man whom supposedly is the Vicar of Christ ( the representative of Christ on earth). Did not Jesus clearly state in Matthew 5:39 “But I say unto you, that ye resist not evil: but whosoever shall smite thee on thy right cheek, turn to him the other also”? Does not the Bible teach in Romans 12:21 ” Be not overcome with evil, but overcome evil with good”? Of course these truths are stated clearly in the Holy Scripture, but once again it is evident that the infallible word of God is not of preeminent importance to this false religious system which consistently promotes the prerogatives of men above that of Divinity. The Pope has made it clear that violent retaliation should not only be normal, but SHOULD BE EXPECTED if someone speaks rudely about another’s mama. And, as cute and prepubescent as this may sound, it’s not cute and harmless at all. Because these statements of Francis are not isolated to what he defines as a normal response to a “mama joke”, but this analogy was specifically used by Pope Francis to illustrate what He deems as a normal response in defense of ones faith being verbally disrespected. So, what if perchance one was to speak about the Church of Rome, which the papacy defined as the mother church, and called it the whore of Revelation 17? Or better yet, called the Pope, whom they address as the “Holy Father, as the Antichrist and the man of sin?  Matter of fact, what if during a mass beheading of Egyptian Coptic Christians on a beach in February 2015, an ISIS operative violently pointed is blood stained knife at the sea and declared “we will conquer Rome”, would that be enough to stir the pot that would lead the papacy to begin silently working behind the scene to influence politicians, especially in the West, to mobilize their military’s to take a punch at this organization of terror? Only time will tell. And, with the Pope scheduled to speak to the joint house of the United States Congress this September, believe you me, you won’t have to wait long to find out.

Back to list
Older Distribution Of Great Controversy At The Vatican